I had the urge to bake - again - so decided to make a pizza scroll for school lunches. It's just a basic dough rolled into a rectangle, spread with tomato paste, cheese, herbs and a mix of bacon, salami and cooked onion. Roll it up, cut it into rounds, and place them into a cake tin to bake. Here it is: 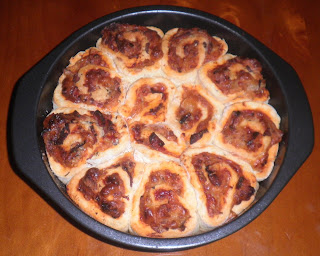 On the finishing front I finally tackled a project that's been 2 years in the making! Hard to believe this little owl has been sitting around since 2011, but he has according to my records. As you may know, my finishing skills leave a lot to be desired. So much so, that I generally don't even tackle the task. For me, the joy is in the stitching & creating and not so much in the finishing & displaying. Living in a house full of males doesn't make for the displaying of pretty, pink things which is where my tastes lie. Having said that, this is very masculine! This is my first attempt at a pillow, and all things considered, I'm pretty happy with the end result. 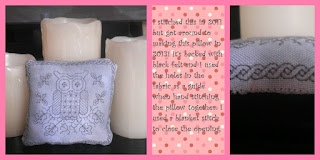 Yummm....the buns sound delicious. And I like the owl pillow...well done!

I love the owl pillow. And mmmmmm... those pizza scrolls sound and look absolutely delicious.

I have never thought that I could bake pizza like that. In Finland we make Boston bun like that.