Saturday started out with a birthday party that DS #2 was invited to at the local pool which he thoroughly enjoyed. Straight from there it was off to an extra calisthenics practise for our team as we have another competition this coming Friday night. From there I went home long enough to pack my calisthenics things (for our photo day on Sunday) and get DS's karate things together (for a tournament - also on Sunday). Then we headed out for dinner.

Sunday was even busier, with DS & I leaving for the tournament at 6.45am. He competed well again, going through 3 rounds to gain 2nd place in kata. I had to leave at 12 to go back near home for calisthenics photos, so DH & DS #1 came to the tournament to look after DS #2. I missed his kumite, but he did well, facing up to the Victorian (and almost National) champion - again - in the first round. He lost, but still managed to get a bronze medal for his efforts. I just made it back in the nick of time to see him lose his round of team kumite 1-0. His team lost this time (this is the club the team faced at the Aus Open and beat) but they won a silver medal as there were only 2 teams entered.  From there we went to Pancake Parlour (YUM!!) for dinner then home again. I managed to clock up 321km that day. Yes - I am insane 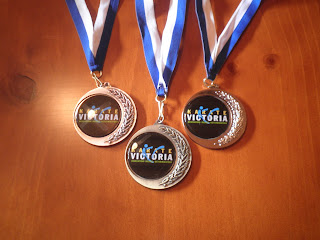