I seem to have dropped off the face of the earth lately. I've had so much to do that blogging and cross stitching haven't featured in my life for ages. Let's see, a quick run down of what's been going on in my life:

DS had another small karate tournament where he met the number 1 kid in the final and lost to take home 2nd place in kata. Kumite he lost out first round to a stronger boy again. Then came nationals which were quite disappointing for him. He had placed 4th in the last 2 nationals in kata, but got a strong draw and lost first round this time. In kumite he also got a stronger opponent first round but managed to keep the score at 0-2 which was by no means a massive loss.

We have had our first calisthenics competition for the year and our results were also not what I was hoping for. Our next one is next weekend so hopefully we can improve.

I picked up a needle again for the first time since May, yes May, and finished a Christmas ornament I had been working on for my kids. I don't know any of the details of where it came from, but here he is anyway: 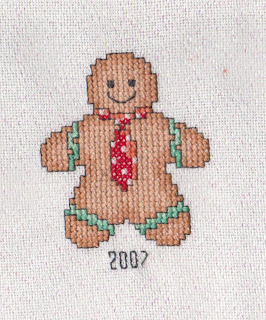