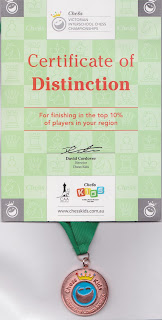 My youngest son, who's in grade 5, entered the inter school grade 6 chess tournament which was held yesterday. There were only 4 schools represented and his school came 3rd. I think he played 7 matches and won 5, several of them in some sort of "4 move checkmate". He was very pleased with his results, as he was the best player from his school, and he came 4th overall out of 30 kids. He did get a"distinction" certificate saying he was in the top 10% of the region - not sure how 4th out of 30 is in the top 10% but hey, it's chess not maths! This is the first medal that he didn't win through karate.