A Fantastic Day of Karate

DS & I went to the final karate tournament before the Nationals yesterday. I wasn't sure whether to go or not as it was a long way from home, but it turns out it was very worthwhile. We hit the road just after 6am, with a breakfast pit stop along the way. The trip was very easy and we made it in no time.

It was quite a small tournament, with only 3 mats in operation. However, there turned out to be about 12 kids in his kata so he got a chance to practise his new ones a few times as there were 4 rounds. He went on to win! He also went into the 10-12 year age group for some extra practise and came 2nd, losing to another state team member. Just before his kumite event, it was announced that Jols (a martial arts equipment supplier) would give the winner of his age group a new Adidas gi, which DS was excited about and used as incentive to win the event with a perfect head kick in the final round. Jols also supplied place getters with a free drink bottle. I even bought DS a new t-shirt and myself a hoodie, so all up a great day!

I even dreamt he won kata, and won kumite 2-1 against a kid called Lochlain. There's a Lochlain he usually comes up against in Melbourne tournaments (who wasn't there) but funnily enough, the boy he beat (3-1) was a Lochlain too! I also dreamt I had to do a kata against another mum, but thankfully that part didn't come true. 2 out of 3 ain't bad! 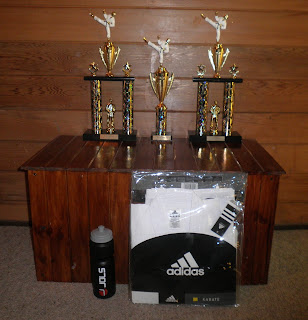