We've just had a full on couple of days attending the Australian Open tournament. Of course my internal alarm clock didn't trust my electrical alarm clock again and started the wake up process at 2am Friday morning. After a few more interrupted hours of sleep we hit the road in the dark. The worst part of tournaments? Hands down the early starts! Oh, and the ironing of the kata gi. This time I took it to the local dry cleaner and paid him to do it. Bliss! Best part? Seeing DS perform well and be pleased with results regardless of placings. Oh, and seeing him make friends with his opponents and being a great sport.

Anyway, DS was entered into both kata and kumite (sparring) in the kyu divisions (open to those below a black belt) and the open (open to anyone, including black belts and beyond - although at DS's age there's generally no black belts). A total of 4 events.

In kata, (both open and kyu grades) he won his first 2 rounds 3-0, but lost out in the final 0-3 to take home a silver medal in each. In kumite, he lost the first round but came back in the repecharge to have a chance for 3rd. Unfortunately he narrowly missed out on winning both matches, so just missed another 2 bronze medals. 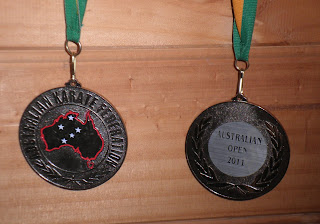 Last year he was only eligible for kata, and had a major wobble in the kyu grades which cost him the chance to medal, but came back to take 3rd in the open grade. This year was a better result all round.

It was great experience, as there were boys from 3 other states besides Victoria. It felt a lot like Nationals because of this, and gave us a chance to see what some of the other states will be bring to Caloundra in August for the 2011 Nationals.