Another finish for me!

I was asked if I could whip up a quilt square recently so I have put aside my Easter stitching to do so. This will become part of a quilt to be donated to the CFA (Country Fire Authority) to raise much needed funds. The idea came about after the devastating bush fires to hit Victoria in the summer of 2009. A fellow Aussie has been organising the project, from memory there are 4 quilts being made, two for Wildlife Victoria (one featuring Aussie birds, and the other Aussie animals) and two for the CFA (one featuring Ellen Maurer Stroh animal babies - too cute!, and the other featuring native florals). I seem to recall stitching an animal baby for the CFA quilt, and this time I stitched a floral design for the other CFA one.
Here's the one I just completed: 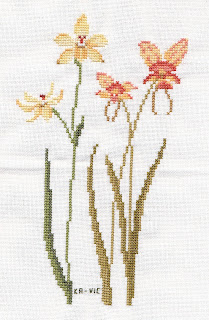 Lovely orchids - well done! What a great cause to stitch for. Would love to see the finished quilts