A hectic weekend in Sydney

A few weeks back DS #2 & I headed to Sydney for a crazy jam packed weekend of karate. We headed off to the airport after school on Thursday and had a disappointing taxi trip to our hotel after we landed. Long story short, the suburb listed on the email confirmation from the hotel didn't show up on the GPS so the driver got lost and told me he'd fix the price at $80. After a call to the hotel, we found it by looking under a different suburb. We finally pull up at the hotel and the driver asks for $100 - a disagreement ensues and reluctantly I agree to pay that much. I was going to pay by credit card but was told it would cost %11 extra!! Needless to say I paid cash and made a complaint to the taxi company. Late night #1 for DS who had 3 big events the next day.

Friday morning sees us up and at the complimentary breakfast before 7am, then off to the venue and the start of a big tournament. The Schools and Universities Championships was up first - DS had entered kata and kumite as usual. Kata had something like 28 kids and kumite 16 - big divisions as usual. DS made it through the first round of kata only to lose his concentration and lose 2nd round to a boy he'd beaten 3-0 only weeks earlier. Kumite was another tough draw, with one of the best kids in the country as his first opponent. He got a hard kick to the guts which nearly knocked him off his feet, quickly followed by a punch to the head. Contact is not allowed to the head, and excessive force in your body contact is also not allowed but I have seen this kid do it countless times. Needless to say DS lost this match and needed to see the medics afterwards. This same boy did the same kick to several other kids and even took one out of the match as he was rolling around on the ground in pain. As this boy went on to make the final, it gave DS a chance to try for 3rd place. He was due to come up against the boy who was rolling around in pain, but he forfeited. DS then had to fight another boy who is always amongst the medalists at all the major tournaments. This match was for the 3rd place medal and he held his own and put up a good fight, but lost.

Fast forward a few short hours and the Australian Open was due to start, with DS doing kata, followed by kumite the next day. This time there were 36 kata kids I think! DS unfortunately came up against the eventual 3rd place getter and lost, which was disappointing for him as he usually does very well with his kata. We finally made it back to the hotel after 9pm, with a quick fast food stop on the way. Late night #2!

The following day was his final event, kumite. However, prior to his event he had a weird stabbing pain in his throat that saw him freaking out and unable to do much to ease it. He also had a bit of a temperature as he seemed to be coming down with something. Thankfully he was up to fighting and he had a much better draw this time around, against a big, but slow, opponent. He was confident of winning, having seen him warm up. DS was up 2-0 with 5 seconds to go, but suddenly he got a penalty worth 3 points - 4 points and you're disqualified. Then with 1 second on the clock something happened which saw him disqualified and extremely confused and disappointed. We are still a little confused as to what happened but his coach (who only saw the video afterwards) thought he was very unlucky. Later we ran into the head state team coach who agreed, and he showed the video to the head referee on that mat, who initially was silent, but when  prodded by the state team coach said "no comment" but then collected his thoughts and went on to defend his actions. Oh, did I mention that there was footage of him throwing his hands in the air at the end of the fight as if to say "oh well". :-(.

As that was the end of DS's events, we got to "relax" a little. Thankfully we chose to do a Maccas run for the kids, as we didn't get back to the hotel until late again. We ordered food late, and had been warned about long wait times, but we still didn't eat until 10.30-11pm! Therefore it was another massively late night with DS not shutting up until 12.45am! We did get to sleep in a bit the next day though, before heading off to the final day  of competition. However we had another taxi drama - a group of 6 of us booked either 2 taxis or 1 maxi cab, whichever would get to us quicker. We waited for an hour before calling to check and were told the taxi had come but we weren't there - total BS. We decided to book with another company who literally arrived in minutes! We then spent the rest of the day watching the real action - the seniors and the team events which were thrilling and entertaining. Then it was off to the airport and home by 10pm Sunday, "refreshed" and "ready" for another crazy week!

Oh, and if you can't WIN a medal, BUY a medal! LOL These were 24k gold plated commemorative coins. 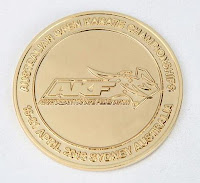 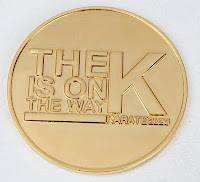 So sorry to hear of your DSs disappointing weekend. Can nothing be done about that opponent you mentioned violating the rules?
The commemorative coins are nice and shiny lol
Hope your DS has a better time of it at his next competition!

Wow I am tired and cranky just reading this post. LOL
I was reading something in the paper about the absurd cc surcharges that some companies charge and there is now somewhere you can go to complain.

My goodness, what a crazy couple of days! Glad you boy is okay though, after getting hit hard.