A milestone birthday, Quasimodo, a karate tournament & an "aw" moment!

A Milestone Birthday
First off, my eldest child turned 13 last Thursday, happy birthday buddy! I am now the mother of a teenager *shudder*. I made a wickedly rich cookies and cream cake from oreos and bought him the usual type of gifts. Of course there had to be computer games in there, some books and magazines, a few bits and pieces and this time an acoustic guitar and a book & DVD on how to play.

Quasimodo
The very next day he put his neck out just sitting on the couch (who said being a couch potato was easy?). One minute he was fine, the next his head was stuck on his shoulder and he couldn't really move. All he needed was a bit of a limp to complete the Quasimodo look! It did get a little better during the day and he was able to move around enough on Saturday to get to the doctor. It seems to be getting better each day though which is good.

Karate Tournament
Sunday brought about another super early start (we left just after 6.45am) for another karate tournament. This time around DS was able to do kata and kumite, but for a change they mixed the girls and boys for the kata. There were around 10-11 kids in kata (his specialty) and got a bye in the first round and won 2 more rounds 3-0, losing out in the final 0-3. There were only 2 girls in it, and they came 1st and 3rd, so he was the only boy to place. He was happy with 2nd as the winner is a very strong little girl who won the Australian Open and deserved to be the winner. Kumite wasn't so good, losing in the first round to a boy who was very full on, not something DS is really used to but it's all good experience.

"Aw" moment
Yesterday after school my 8 YO was doing something outside, coming inside for scissors and paper. I didn't think much of it until he came inside and handed me this, telling me he loved me: 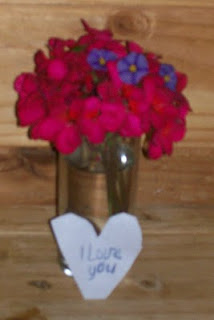 How sweet is that? As far as I know, he hadn't done anything wrong either! LOL