I was after a basic cross stitch design to stitch for my youngest son who doesn't like the dark and is prone to nightmares. I wanted him to be able to see it in bed at night and know that he is safe, hence I came up with this simple design. I wasn't after anything pretty, just a simple design I could stitch quickly for him. Oh and by the way, he hasn't had a nightmare since I made it a few weeks ago. Touch wood! For some reason I thought the flourescent DMC thread was the glow in the dark one so did about half of the design before realising I was using the wrong thread. Then I restarted in the right thread, but I hadn't measured the wording properly so that was off centre and had to frog it again! 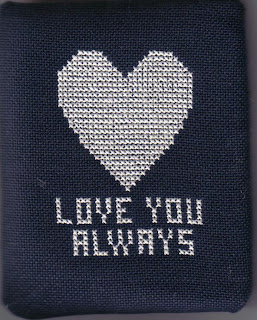 Such a lovely idea. PLus it has your love stitched into it.