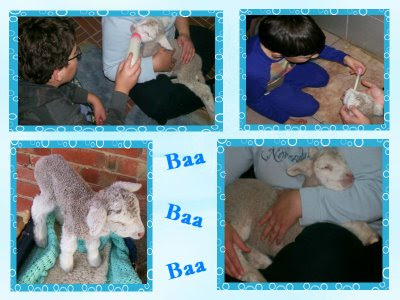 Mary had a little lamb that is. On Tuesday 12/5/09 my DH spotted a newborn lamb on the side of the road. It wasn't fenced in and there were no houses or other sheep around. It was at most a few days old, but potentially born that day. We just had to rescue him! He's just like a baby, being bottle fed every few hours, and has even fallen asleep in my arms a few times. He's even started to frolic, if we run around like idiots, he jumps around too. He's like a little shadow, baaing everytime we leave him. We've introduced a couple of our other sheep to him, but he's still more interested in us, and they couldn't really care less about him. At the moment we have him sleeping downstairs, which was the cat's bedroom. Jazz is not impressed he has been relegated to the bathroom. He's a big scaredy cat, not sure what to make of another small white creature stealing the love of his humans. I think the lamb will go into the garage tonight so Jazz can have his room back and life can go somewhat back to normal!
On top of feeding and cleaning up after a newborn lamb, my DS woke up on 13/5/09 sick. Of course it just happened to be his 12th birthday too, poor kid! We had to postpone plans for dinner at Taco Bill's and a white chocolate and honeycomb mud cake, but he was up to opening his gifts. No surprises there, LOL! He got a lot better, but last night he went downhill again. Might have to take another trip to the doctor if he doesn't improve. The original diagnosis was gastro, but that should have cleared up after 4 days. He was well enough to sit an entrance exam on Saturday for our preferred secondary school for next year, so that was a bonus.


I have been somewhat busy, as you can tell, so there's been no cross stitching for me lately. I have been sequining costumes for calisthenics though, I'm onto number 4 of 9. The cross stitched piece I've been working on hasn't been doing much for me, so being disciplined and prioritising my time hasn't been hard. I also would like to start another EMS baby animal for the stitched quilt that Terry Louise is organising, but I still have a month to do that. Actually a month doesn't sound that long when you think about it :-)
at 3:08 PM