A WIP pic and some knitting!

Here's a progress pic of my 3 Christmas bears as of the17th of April: 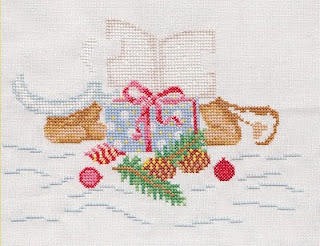 I've put my stitching aside for the moment to work on a knitted scarf. I found some pretty "fuzzy" wool for 75 cents a ball (at The Reject Shop for you Aussie ladies who might be interested) so decided to make a scarf. I recently bought a new cardigan/jacket thingy in a bone colour, and some camel coloured boots so a brown/cream scarf will tie in well with those. I started this last night, after reading my instructions on how to cast on. I tried knitting as a kid, but didn't go on with it. I had to get my mum to cast on and cast off, as I could purely knit in basic rows. Thanks to the wonder of the internet, I've since found simple casting on instructions and can recall how to knit. The problem is I don't have casting off instructions, LOL. Not sure how I finished the other scarf I made a few years back. I'm hoping this one is a little better as the other one starts out fat, becomes thinner, gets fatter in parts......not my best crafting effort :-)
Anyway, here's the pic, what do you think? I love the fact it's so fuzzy you don't actually see the knitting, probably a good thing considering my last effort at making a scarf :-( 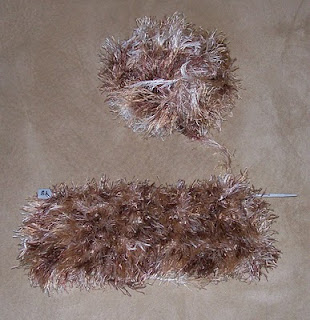 looking all fuzzy and warm. xx