You are a lamb, NOT a human! 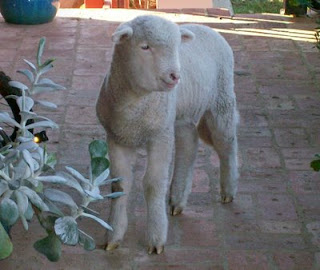 Our lamb has been drinking us out of house and home. I never really stopped to think how much milk he was going to consume when we first got him, but let me tell you it's a LOT!! Thankfully he is old enough to be weaned, and our research (gotta love google) tells us that cold turkey is the way to go. Poor thing, not only is he an orphan, but he gets the milk ripped out from under him too. So far he has been coping OK though. We've made him a lovely grass cordial which we've been feeding him instead of the milk. Although he has access to water, we haven't seen him drink yet so want to make sure he keeps his fluids up. He seems to look forward to his feeds, regardless of what's in the bottle. He has taken to nibbling at various grass and weeds so we know he's not going to starve.

He will come and stand at the downstairs door and baa when it's time for a feed. If he see's me down there he pushes up against the glass door as if he can just force his way in. Once inside he'll have his bottle, then try his best to hide so he doesn't have to go out again. Just this morning he climbed the stairs and tried his best to be invisible. I coaxed him back down but it was an effort. Then he tried to play chasy around the room, until I grabbed him and basically forced him out. He reminds me of a cheeky toddler who doesn't want his nappy changed.

Yesterday when the other 8 sheep were up near the house, I took the lamb out for a walk in the paddocks. I took some old bread to feed to the sheep too.  We went right up to the grandpa of the flock and the lamb had a bit of a sniff at him. I walked down to the dam with all the sheep, but once the bread ran out, they stopped following. Of course, the obedient little lamb followed me though. I'd go left, he'd go left. I'd stop, he'd stop. The plan was to get him to feed on what little grass we have, and to join the flock and go live in the paddocks with them. He had other ideas!

I left him in the paddock while I checked the letterbox, and heard him baaing to me. Once I  got back though, he'd gone and I dared to hope he'd gone off to find the other sheep. No such luck! I got back to the house and who was patiently waiting in the backyard for me? I'll give you one guess. Not sure how he found his way in, but he did! He's now got access to the front and back yards, and will not listen when I tell him he is a sheep and must go and live with his kind. I'm happy for him to live where he pleases, but he hasn't got enough food where he is, and no company. The cat is still scared of him and keeps his distance.

Sounds as bad as cutting down milk for a baby person! But lots of fun either way! He sure has grown.