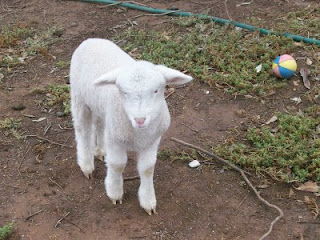 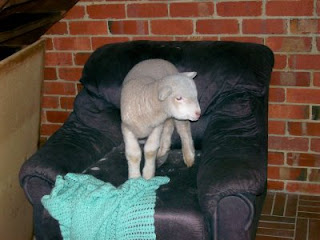 Here's another few pics of the lamb, he's 3 weeks old here. He's actually getting to be a handful, he's a big boy now and isn't exactly gentle. I had a massive bruise on my thigh because he stood on me in his frenzy to be fed. He races up whenever it's feed time and nearly bowls me over. He also thinks he's an indoor pet, as I feed him downstairs. He is very reluctant to leave afterwards, I have to force him out the door. He remembers the old lounge chair he used to sleep on when he was a newborn and jumps up there and tries to settle in for a sleep. He's a pretty clean animal, if we could house train him, he could live downstairs! He's also adept at climbing up and down stairs too!
at 11:12 AM