DS #2 & I clocked up another super early start, the earliest yet, for another karate tournament. This one was in Warrnambool and run very differently than the usual ones we've gone to. In kata, there's usually a knockout system in place. A random draw is made, and you need to win against your competitor to stay in the competition. This time however there was a points system. Each person performed their kata once and was given a score out of 10, with the highest 3 taking out the prizes.

Anyway, I entered DS into kata, kumite, the older age group of kata, and weapons for the first time. Hey, it was cheap to enter and made the trip worthwhile! Anyway, he took out 2nd place in his age group of kata, only .2 behind the winner. Kumite was next up and DS did well but narrowly lost his 2 matches to just miss 3rd place. Weapons came next, and DS was a little unsure of this as he has never competed in this section before, and it was under 16 so being 9 he was concerned he might come up against some big experienced kids. However, he performed well to take out 1st place! We were both pretty rapt (and surprised!) as he chose to do a bo kata. He has only had one lesson in this weapon, but decorated his own bo and made up his own kata, all within the last week. Not bad for a thrown together routine, with not much confidence going in. Next up was the older age group of kata, with 11 kids in total. Many of them were quite strong and confident, but DS stepped up his kata to take out 1st place. He was last on the mat too, so was able to see the level of the competitors he was up against. Normally that could have been unsettling, but he really pulled out all the stops! This tournament was also unusual in that 1st place took home a trophy AND a medal. All up, he won 2 trophies and 3 medals from 4 events.

A quick trip to the beach for some karate pictures and home we came! 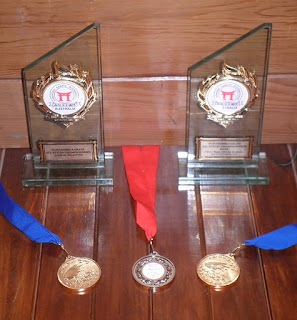