Sick of karate yet?

Yep, we attended yet another karate tournament on Sunday, miles away from home again. DS performed kata first as usual and did really well to take home a nice big 1st place trophy. He also entered kumite again against a group of kids he hasn't come up against much before. He started out more aggressive and confident than usual and took his first 3 rounds to make it into the final. The final saw a draw, and another minute on the clock. His opponent then hit him too hard a couple of times (light contact to the body is OK, no contact below the belt or above the chest is allowed) and knocked his confidence a little. He kept up the fight though to take home the 2nd place trophy. Here's hoping he can keep his new found confidence and attacking skills for the next tournament, the last of the year.
Here's his winnings: 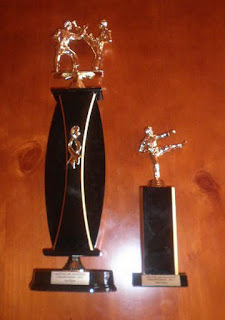 Your must be so proud of your son Kim. Wonderful achievement.