As you may know, my 9 YO son is on the Victorian Karate team for both kumite (sparring) and kata. The National Championships were last weekend in Caloundra, on the Sunshine Coast in Queensland. He and I were booked to fly with Tiger Airways, but we had to cancel as they were grounded for safety reasons. I'd booked with them ages ago as I got a good price and in the end paid something like 3-4 times as much with another airline. That hurt, but I can't complain, at least we got a flight at a reasonable time. 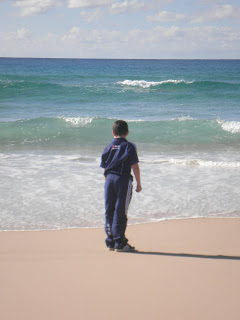 Once we landed we got our hire car, stopped for an all-you-can-eat Pizza Hut buffet overlooking the beach, then drove to our hotel. The following day DS had both his events. As usual, kata started the day. He performed really well, winning his first 2 rounds 3 flags to 0. He then came up against the 2010 National champion in the 3rd round and lost 0-3. This boy made it through to the final so that meant DS had a chance to try for a 3rd place medal. In my opinion, he deserved the 3rd place but very early on in his performance he went to do a kick and his supporting leg came out from under him and he stumbled, rolling his ankle in the process. He recovered well and finished beautifully, but lost 1-2 flags. He did really well to earn a flag as stumbles and mistakes normally cost you any chance of a vote from one of the 3 referees. He handled the disappointment like a trooper. He did hurt his ankle a little bit too, as a bruise came up and we got some ice on it to stop the swelling. Although his results have been a little disappointing in the 2 National Championships he's entered, I would still put him up there as one of the top few kata kids in his age group. On one prior occasion this year he has even beaten the boy who took out this year's title, so that's exciting!

Not much later that day he had kumite. He came up against the eventual winner 1st round and lost 0-4 I think. He got another chance to come back for 3rd but lost that round also. He has a few strong competitors in his age group and as he is a little I think he is still overcoming a lack of confidence. It is scary to face an opponent who's aim is to kick and punch you as much as possible (That sounds harsh, but it is controlled and they barely make contact. They are also suited up like Michelin Men!).

The following 1 1/2 days were spent at the tournament, before we drove back down to the Gold Coast where we met DH and DS #1 for a family holiday, which I'll post about later.