I am another year older :-(. I did have a great birthday with great gifts, food and cake though, so adding another year onto my age was kind of worth it.

Ds #2 had the Karate Victoria presentation dinner, where the state team was announced. He has made the team for both kata and kumite (sparring) which he is pleased about. There were several awards given out to the older athletes and our club was well represented. DS has also had a couple more tournaments. At the first one he tried a new kata that he's learning and lost his round as it wasn't quite polished enough. However, he still managed a 3rd place trophy. He also took home another 3rd place for kumite after losing to the current Victorian champion. At the next tournament his new kata was more polished and he won all 3 rounds to take home the winners trophy. He came up against a fellow state team member in kumite and lost out in the first round. 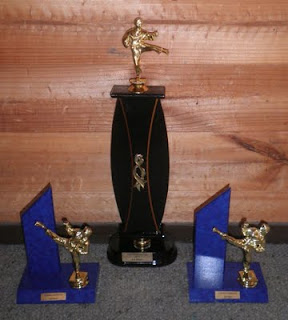 There's not much to report on the stitching front. I've always known I'm a slow stitcher, but I think it's now official. Where are the "Guiness Book of World Records" people when you need them? I am taking soooo loooong on my current 2 colour, "simple" project that it's no longer funny. I'm not too embarrassed to admit I've also had to frog it at least twice. Uh Oh!! It seems the only time I get to stitch lately is at karate, thankfully DS have a few classes a week or else it would become a UFO.

Happy Birthday :) and thanks for commenting on my blog, never thought of sending 2 parcels to avoid the fee LOL

Happy Belated Birthday. You must be proud of your boys, wonderful achievements for both of them