My 7 YO son had his first real karate tournament against other clubs recently. We got there just in the nick of time as the freeway was closed for 99% of the way, there was traffic everywhere, we got every red light known to man (and woman), I missed the turn off to get back onto the freeway, then I didn't know the way because of our detour off the freeway, etc, etc. I tried really hard not to let DS know how stressed and panic stricken I was. I'd have felt SOOOO guilty if we missed his first event, they always seem to start with his age group, (the youngest kids) so I knew we had to push it. We arrived just as they were organising the kids, phew!!

First up was his kata against about 13 other kids. He was lucky enough to get a bye in the first round, and won his 2nd round (and I think there was a 3rd round) both 3-0. Then he made the final and made a bit of a mistake, and lost 0-3 to take out 2nd place. The boy who won was strong, and obviously experienced in tournaments. DS did really well, he didn't really look nervous, although he said he was. The winner won a large trophy, while every one else got a smaller 2nd place trophy as "everyone's a winner" in their age group. The Australian government has made a recommendation to clubs that sporting events for kids under 7 be free from too much competitiveness and having "winners" and "losers".

Next up was his kumite, which he isn't quite as good at. He won his first round, 2-0 but met the eventual winner (the same boy who won kata) in the 2nd round. Again this boy was strong and very aggresive. DS lost his balance and fell to ground, before getting up and getting punched in the nose which is obviously against the rules. He did have headgear on, as well as body armour, gloves, mouthguard and shin and foot protecters on, he looked like the Michelan man! He was OK, and wanted to continue his match. His opponent got a warning and lost a point, while DS gained a point due to the illegal move. At the end of the round the score was even, 2 -2 I think. They went into overtime, with the score even again at the end. Then the referees voted on who they thought was best, and DS lost 0-2 knocking him out of the competition. It was unfortunate he got that opponent as he probably could have beaten most of the other kids. He did enjoy himself and had 2 trophies to show for his efforts. There were a few young first timers from our club there, and they all got 1st, 2nd or 3rd places. 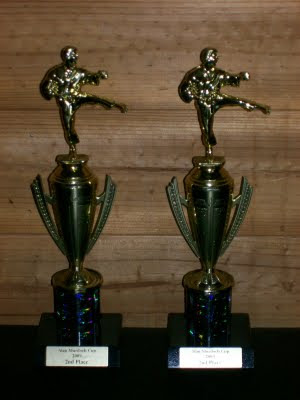 On the weekend, our club had about 15 kids attend the AKF National Championships in Adelaide. They made up the bulk of the Victorian team I believe, as they tend to do each year. They all did well and took home a total of something like 6 gold, 6 silver and several bronze. DS is aiming for a place on the Victorian squad one day, hey he's even aiming for the Olympics and karate isn't even an Olympic sport, LOL (yet!)
at 1:37 PM